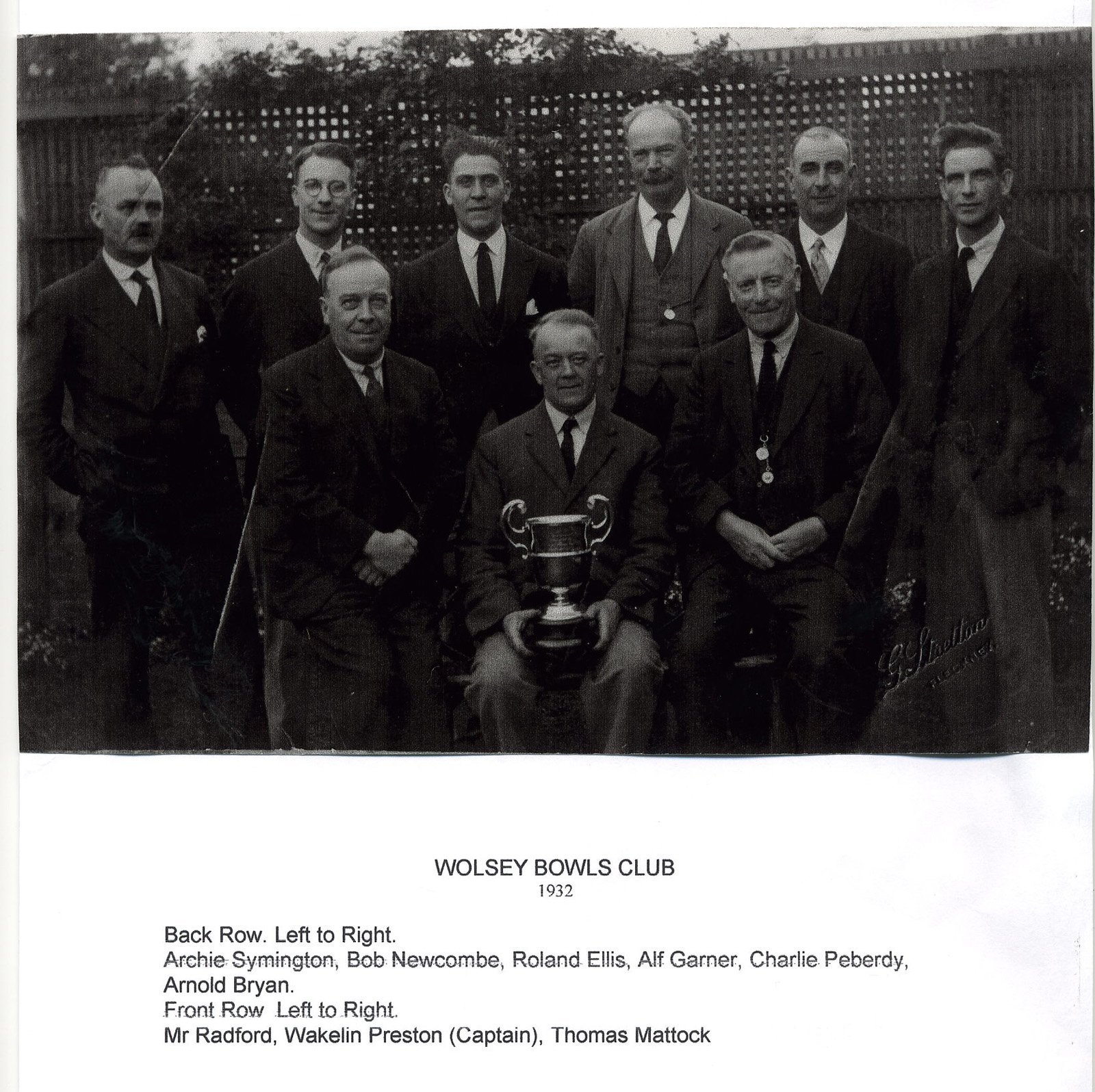 Fleckney had a Bowls Club in the first part of last century courtesy of Wolsey Ltd which was the major employer in the village at that time. The site still exists as the land adjacent to the Band Hall in Wolsey Lane. It is assumed that the move by Wolsey out of the Village and the commencement of World War II led to its demise. Only a few records including this photograph shown above have survived,

In 1988/89 David Hollingsworth who was the Manager of the recently built Sports Centre produced an N.E.B.S. M. Course project on the viability of having a Flat Rink Bowls Green on a designated area of the Recreation Ground. Fleckney Parish Council was supportive of the idea and having negotiated with the District and County Councils re funding it was decided that a private Club would be in a more favourable position to apply for grants from charitable organisations and sources.

The inaugural meeting was held on the 11th April 1990 at which a Steering Committee was appointed. The Club was named Hart of Fleckney Bowls Club to commemorate Reg Hart a local farmer and Parish Councillor on whose land the Recreation Ground had been built and who had expressed a hope that a bowling green would be one of the facilities incorporated. Sadly he did not live to see his hopes fulfilled.

In addition to those at the meeting others were encouraged to be 'Founder Members' at a cost of £1 each and this raised a total of £128. At an EGM on 3rd September 1990 it was agreed to ask these Founder Members to contribute a further £25 each which would be set off against future Membership Fees. 43 Members contributed but not all of them joined the Club later.

In November 1991 the Two Counties Group were appointed to construct the Green. By then monetary grants had been agreed with East Midlands Sports Council and Market Harborough District Council. Construction work started in January 1992 with the turf laid in May 1992 and the Green was declared open on 31st May  1993 by Edith the widow of Reg Hart.

Between 1990 and 1993 Members played carpet bowls at the Sports Centre. In 1991 the Club Members played their first ever game against Market Harborough Police at Welland Park with a the predictable result, but continued to get good support from that Club when there was no other Club to play. During the 1992 season they played 13 outdoor games against local clubs on their greens.

In the early years a Portacabin obtained by a grant of £2,300 from The Foundation for Sports and the Arts was the Clubhouse, with a Potaloo meeting other requirements. Visiting Clubs were entertained primarily at the Conservative Club, with most other Pubs and Halls being also used for entertainment and other events,

The first bit of silverware won was the BOTRA Hotshots Trophy by Don Plews, Arthur and Marilyn Higgs and Mick Clarke in 1995.

In 1996 a team was entered into the Market Harborough Bowls League in Division 3, which they won and went on to top Division 2 in 1997, and Division 1 in 2001. In the meantime two other teams had been entered into that League with the B Team winning Division 3 in 1998 and the C team doing the same in 2000. In 1997 Lachlan MacInnes won the RNIB national Jack in the Box competition and having achieved the highest score in Leicestershire represented the county in the finals at Worthing, the then headquarters of bowling.

In 1995 a Sub Committee was appointed to manage 'Project 2000' which aimed at acquiring a proper Clubhouse by 2000. Much hard work resulted in a new Clubhouse being opened ahead of schedule in July 1998 with money raised by fundraising, external donations, and grants from the Lottery Sports Fund, Foundation for Sports and the Arts, Harborough District Council, Fleckney Parish Council, Leicestershire Parish Council and to meet the deadline a last gasp sum of £3.852 in the form of donations and loans from 37 Members A further grant in 1999 from Lottery - Awards for All paid for two short mats to enable bowling to take place all year round, which was a condition of some of the grants awarded.

Use of the Clubhouse during the first couple of years showed up areas that were not user friendly. By 2002 the kitchen had been enlarged with shutters applied on both the kitchen and bar, curtains hung and a false ceiling installed to reduce noise and condensation, the gents changing room enlarged by including the redundant office, and a larger equipment store built. A conservatory was added in 2006.

Ladies Presidents (Alternating with men as Club Presidents from 2015)